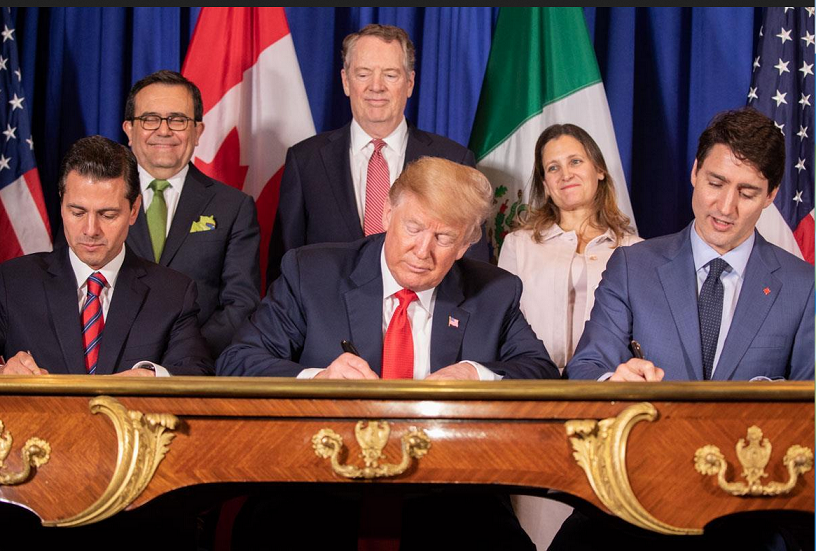 Under the leadership of President Donald J. Trump, the United States has reached an agreement with Mexico and Canada in the renegotiation of the North American Free Trade Agreement (NAFTA). The new United States-Mexico-Canada Agreement (USMCA) is a mutually beneficial win for North American workers, farmers, ranchers, and businesses. When finalized and implemented, the agreement will create more balanced, reciprocal trade that supports high-paying jobs for Americans and grows the North American economy.

To view the full text of the agreement between the United States, Mexico and Canada signed on November 30, 2018, click here.

While the United States, Mexico, and Canada have concluded a new, rebalanced agreement, NAFTA currently remains in effect. The USMCA can come into effect following the completion of TPA procedures, including a Congressional vote on an implementing bill.

U.S. Trade Representative Robert Lighthizer on Friday said he has notified Congress that the new U.S.-Mexico-Canada trade agreement will take effect on July 1, a month later than initially proposed.

In a statement, Lighthizer said both Mexico and Canada had taken measures necessary to comply with their commitments under the U.S.-Mexico-Canada Agreement (USMCA), which replaces the 26-year-old North American Free Trade Agreement (NAFTA).

Some industries, including automakers, had been arguing for a delayed implementation because of the difficulties they are facing from the coronavirus pandemic.

Mexico had asked the United States and Canada for a longer transition period for the auto industry to certify that it was meeting new, more stringent North American content rules.

Lighthizer said his office would work to ensure a smooth implementation of the new trade rules.

“The crisis and recovery from the COVID-19 pandemic demonstrates that now, more than ever, the United States should strive to increase manufacturing capacity and investment in North America,” Lighthizer said in a statement. “The USMCA’s entry into force is a landmark achievement in that effort.

The accord includes tougher rules on labor and automotive content but leaves $1.2 trillion in annual U.S.-Mexico-Canada trade flows largely unchanged. Trump had been a critic of NAFTA.