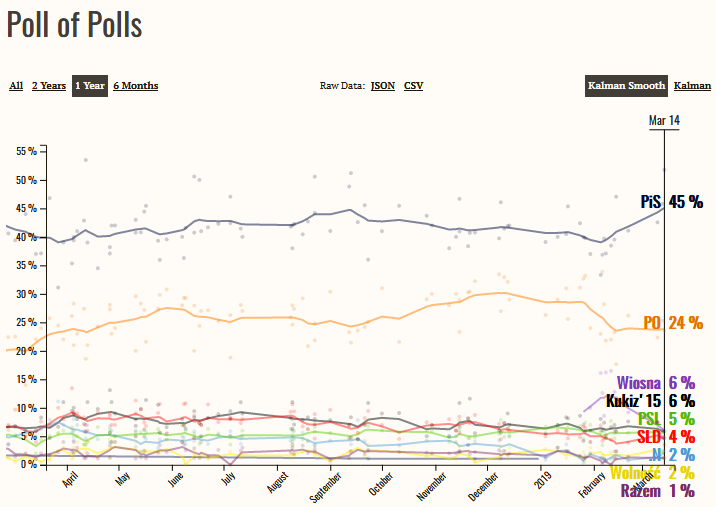 WARSAW (Reuters) – Poland’s ruling nationalist party aims to stem a decline in its popularity ahead of two key elections this year with warnings that opposition support for LGBT education is a threat to Polish culture and should be blocked wherever possible.

PiS has targeted LGBT rights as it strives to reverse a decline in popularity amid corruption allegations against financial regulators and questions about party chief Jaroslaw Kaczynski’s business dealings, among other things.

Poland’s European Coalition, an umbrella grouping of opposition parties, has passed PiS by two points ahead of May’s European Parliament elections, according to a new opinion poll. Parliamentary elections will follow in the autumn.

The approved lesbian, gay, bisexual and transgender (LGBT) education program in Warsaw is meant to teach students about sexual orientation, discrimination and reproductive health, according to standards set by the World Health Organization.

Conservative politicians, Roman Catholic leaders and commentators argue such lessons will rob parents of the right to decide how their children should be educated and see children discovering their sexuality too early.

“The whole social mechanism of preparing a young person, first a child and then a youth, for future roles as women and men, to start a family, for the role of mother and father, is being questioned. It could be destroyed,” Kaczynski told a PiS party convention on Saturday.

He added that if the opposition prevailed in the coming elections, it would “continue this attack on families, on children,” and urged voters to help PiS foil such outcomes.

Over half of Poles think homosexuality is not normal but can be tolerated, while a quarter believe it should not be tolerated at all, according to a poll carried out in late 2017 by CBOS.

Poland remains one of Europe’s most devout countries. Roughly 90 percent of the 38 million population identify as Catholics and some 12 million attend mass every Sunday. But while PiS is popular in small town and rural areas of Poland, it draws much less support in larger cities like Warsaw.

Some analysts said the PiS decision to zero in on LGBT matters in an election year was a strategy of playing on fear of the unfamiliar to win votes at a time when support for the PiS is floundering among young voters and urbanites.

“What the ruling party is doing isn’t a normal discussion about LGBT rights. Through certain connotations, linking this subject with a so-called threat to children, politicians are trying to create an atmosphere of fear,” sociologist Malgorzata Fuszara told daily Rzeczpospolita on Wednesday.

The tactic worked for PiS previously, analysts said, noting how in 2015 it used anti-migrant rhetoric to drum up support before its election defeat of the governing center-left Civic Platform.

“Here they’re playing on fear just like they did with migration. Only this time it’s not against migrants and Islamic countries but against the expansion of Western values,” said Aleksander Smolar at the Stefan Batory Foundation.

For their part, Polish bishops said in a statement that the Warsaw sex education program would undermine democracy by limiting parental rights and eroding free speech, as children would be instructed in ways at odds with Polish tradition.

PiS has used its electoral mandate to strengthen Catholic values, vowing to “lift Poland from its knees” in its fight against the alleged imposition by countries like Germany and France of a more secular, liberal way of life.

“We don’t want families to be replaced by a new social structure. We don’t want the state, specialists or experts to be the only ones to decide on how we raise our children,” said Zdzislaw Krasnodebski, a PiS ally in the European Parliament.

Polish schools do not currently offer formal sex education, instead teaching students how to prepare for “family life”.

Poland ranks second to last out of 28 European Union states when it comes to equality and non-discrimination, according to Rainbow Europe, an organization linked to the International Lesbian, Gay, Bisexual, Trans and Intersex Association.

Gay marriage is illegal in Poland and homosexual partnerships are not legally recognized.

PiS has long focused on bolstering the traditional family unit, comprised of a mother, father and children through social spending programs such as “500+”, which awards 500 zlotys ($131) a month per child to families with more than one child.